The logistics industry has been warning about driver shortages for many years but a combination of Covid-19, Brexit and the ongoing structural issues restricting the supply of drivers has brought us to a crisis point, especially in the UK with Transport Intelligence’s recent research showing a shortfall of at least 76,000 drivers.

Last week saw the chain restaurant Nandos run out of chicken in the UK and now McDonald’s is unable to serve milkshakes across the country, in both instances driver shortages are said to be to blame. There are also reports that BP has had to close some petrol stations and that UK supermarkets have struggled to keep milk on the shelves because of HGV driver shortages.

Ti’s latest research paper on European Driver Shortages assesses the scale of the crisis right across Europe, with a total shortfall of drivers now surpassing 400,000.

The most heavily impacted European countries are Poland, the UK and Germany. The UK is in a particularly difficult position as it is not only grappling with Brexit, but it also saw many European workers leave over the course of the pandemic, as fears over lockdowns grew. 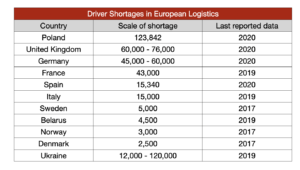 The driver shortages have been affecting the global road freight market for around 15 years. The issue comes as the pool of truck drivers is contracting but demand for transport is rising. The COVID-19 pandemic has further exacerbated the already alarming issue of driver shortages as new drivers have been unable to train and take their tests and Covid restrictions make the job even less attractive.

Even before the pandemic a serious cause for concern in the industry, the lack of drivers in the road transport industry was at an all-time high with many of its underlying issues being long-term challenges. Factors such as an aging workforce and insufficient numbers of new recruits, due to working conditions and image issues of the profession, have been plaguing the industry for many years.

Ti’s latest research paper on European Driver Shortages assesses the scale of the crisis across Europe and examines the policies, strategies and technologies being proposed and implemented by regulators and road freight operators to help alleviate the crisis.

Transport Intelligence is the research partner of the Foundation for Future Supply Chain and has acted as advisors to the World Economic Forum, World Bank, UN and European Commission.

The US is presently terrified of a rail strike, with the House...